The Uni Premier squad rolled on with nine more points from the nine available with all teams still holding 100 per cent league records after round two wins against Adelaide Comets.

This was the first foray under the Friday night lights for the A’s and B’s and both sides made hard work of it, overcoming early deficits to win by a single goal. The Blacks were looking fetching in their brand new kits emblazoned with the return of long time Uni Blacks sponsor ‘The British Hotel’.

The A match was a hard fought contest with some big tackles flying in spectacularly. The Blacks found themselves down early.

The fightback began when Ryan Lewis used his quick feet and awareness to find Oli Gissing who took his first for the night on his left foot with composure under pressure.

Ryan was again the talisman, when he was brought down in the box from another skilful dribble and stepped up to convert the penalty himself.

The game stayed at 2-2 until into stoppage time.

Chances were flying in at both ends with Blacks’ keeper Andy Norman forced into some good saves as he managed to hold the fort.

Oli Gissing then scored the early contender for Blacks goal of the season with a curling effort that finished ‘postage stamp’ top corner on his ‘weaker’ left foot, rebounding back out onto the field from the internal frame of the goal.

The goal sparked mass celebration amongst the crowd gathered at the Metro pitch late into the night and shortly after as the final whistle blew, the pitch was invaded by a mass of black.

It was not all good news for the Blacks, however, with another centre back being taken off with an injury. With Nick Kalatzis watching on from the sidelines in his moon boot, already out for the season with a torn achilles, Matthew Duns went down in the second half but is hopeful of making a recovery as the league breaks for Easter. 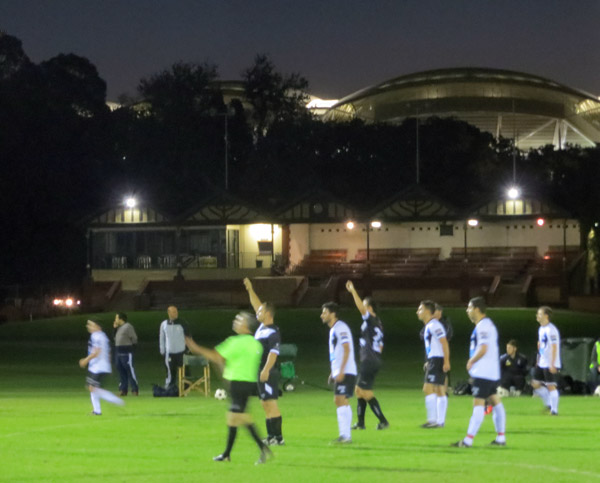 Into space: The Blacks players help out their Comets opponents by pointing out the direction home after giving up a winning lead.

The Bs was also a tight affair with the Blacks going down early before Shaun Kastelijn equalised from the penalty spot. Shaun finished well from 12-yards, sending the keeper the opposite direction and slotting into the empty net.

Mohammed Saud then continued his excellent run of scoring form with the winner after he was brought on as a second half substitute. Mohammed wriggled through the Comets’ defenders with some skilled dribbling before condemning the visitors to their first defeat of the weekend with a precision strike with his 10th goal since joining the Blacks in the pre-season. 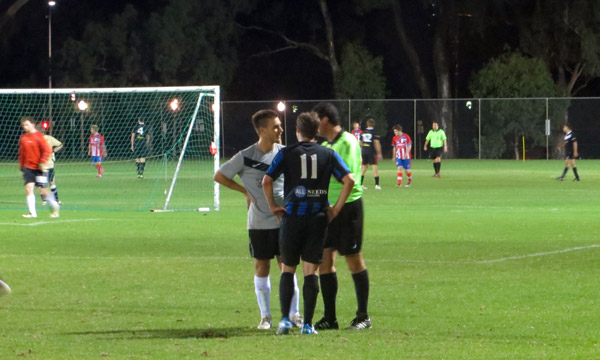 Hot atmosphere: The referee sorts out the difference between a Comet and a ‘real shooting star’.

The Cs finished the weekend blackout with a convincing 6-1 victory to make it 14 goals in the first two rounds. The game started as a contest but the Blacks started the rout midway through the second half after Paul Decelis managed to head home a trademark long throw from Cameron Shields after the Comets players tracked the Uni ‘tall timber’.

Lucas Barsby then made it two, winning the ball in the attacking third and blasting the ball into the top corner for a 2-0 lead at half time.

Decelis and Shields linked up again for the third goal when the latter headed home at the back post after the ball had rebounded off the woodwork from Decelis’ driven strike from the right corner of the box.

Decelis scored his second of the game from another header before completing his hat-trick with a calm finish at the back post. Mahesh Umapathysivam also got his name on the score sheet.

This week sees a break from official competition for Easter with round three against Adelaide Titans the next assignment.