Not only is a semi-final position the prize for the winner; the coveted Jill Latimer Medal is up for grabs – awarded to the best player on the pitch from either team. 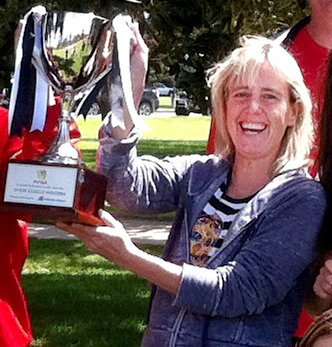 Former Matilda and State hero Latimer, starred for the Blacks across several decades, then played seven years at Stirling, before returning to Adelaide Uni prior to retirement from the game at the end of 2011. She led The Blacks to the State League title in her final season.

To celebrate the contribution of Latimer to both clubs, a tradition started between the women’s teams of both clubs in 2009 with an award in her honour each time the clubs played against each other.

Although Stirling and The Blacks seldom play each other in regular competition now they are in different divisions, preseason fixtures in lieu of this have created a healthy rivalry.

This Thursday night will be the biggest test so far in 2013 for The Blacks division 2 women.

Coming off an 11-1 thumping of Sturt Marion and then missing a weather-postponed game isn’t ideal preparation for this match. But Coach Kosta Jaric has these girls drilled pretty incisively. They have had a good run so far in the cup, scoring six goals and conceding none. They are also top of the league table. You get to the top by playing good, disciplined football. Jaric has got his team in the perfect position to compete for some silverware this season.

Stirling has also been impressive this year and sits third in division 1.

History shows The Blacks to be the victors on more occasions against the Hills dwellers, but this is cup football, so expect the unexpected.

Steph Gilbert leads the Blacks with three cup goals, while Stirling has shared all eight of its goals across its team – it is this diversity of artillery that The Blacks can ill afford to underestimate.