The week after Uni Grey pinched a point of the Cobras had been a hectic one all round. Skinner and Dools had been fending off calls from Man U, Chelski, Man Schitty and Everton due to recent team results. The team themselves had trained like champs but come Saturday…

Our only weakness! WATER! And there was lots of it.

McLaren Vile coming from what is essentially a hole in the ground, are somewhat used to the winter floods. Uni, unused to significant aerial precipitate, had legitimate fears of solubility and miscibility. Moreover, recent studies in the hydropsychosomatic field have shown homo sapiens exposed irregularly to airborne moisture will develop negative reactions to said presence. Educated and highly attuned university students are most susceptible to these legitimate phenomena.

Long story short, it was raining and we lost.

That being said, we were unlucky. Mechlaren Vale was lucky enough to receive an early penalty. Jacob was unlucky enough to have arms and the presence of the ball in his vicinity triggered a penalty call. Dools in GK had 98% of the goal covered but the wily MacLaren hole dweller chose his only weakness, straight down the middle. Vole got a second shortly after from a ‘kinda ok’ cutback to a ‘kinda quick guy’ running through a ‘kinda vacant’ area. The keeper had 83% of the goal covered, but unfortunately down the middle was again unprotected.

Half time. Skinner was inundated with calls from Bayern and PSG, looking at their options, while the rest of the team debated the merits of trying harder. Eventually after mucho discussionado Uni decided that they’d play better in the second half.

Midfield upped their game early with Seamus doing tricks and Gaku doing flips. Hannay had set up a Stalinesque regime of sharing the ball round and Uni were benefiting. Davey and Pistol talked it up and ChriSaville started making runs up the wings. The only thing left was for the forwards to put the ball into its home. FFS send the ball home.

Flynn was his usual destructive self, making Vale ail all over the place, and Sammy C and Huss both put in a thrilling shift. We just couldn’t find that breakthrough. Skinner on the sides decided to make changes after hanging up on Florentino Perez. Anish and Simon entered the fray and the ‘Mcklaren’ finally buckled. Anish able to poke the ball past the keeper with the ‘pokiest of toe pokes’.

Uni kept up the pressure but just couldn’t penetrate. It was like an episode of Channel 7s Revenge. Eventually some fool committed a heinous foul a couple metres outside of the box, giving M’Laren an offensive free kick. Having recruited Gareth Bale just for the occasion McLoren got the G. Dools had 96% of the goal covered and despite a 1.2m vertical leap (AIS record) he couldn’t save Gareth’s dipping effort.

Unfortunately Uni couldn’t do much after that aside from being swell guys in general. 3-1 loss to MackLaren Vale. We blame water and education. People should be more afraid of water in general.

When the A game got underway roughly 4.3 metres of torrential rain had fallen on metropolitan Adelaide. People were white water rafting down the Torrens. The playing fields resembled the Western Front c.1918 after a particularly heavy artillery campaign.

Uni players huddled with the enemy under the marquee and tried not to avoid eye contact. They say that if you make direct eye contact with a McLaren Vile man you succumb to their horrible curse and you’ll end up enslaved, cobbling their shoes and stuff for eternity. So we made sure that didn’t happen.

Pre game consisted of sampling several McLaren Vale reds and making disparaging comments about their poor bouquets and unbalanced tannins. We also put our grey shirts on and passed the ball around a bit. Macallan Vale looked to be busy taunting small children and kicking puppies in their warm up.

Captain Primer was only just barely visible through the mud, driving rain and mustard gas, by virtue of his fluoro armband. I assume he lost the toss again but can’t be sure. When the game got underway the players set about implementing the unstoppable game plan formulated by coaching geniuses Dooley & Skinner to a T. The game plan called for the guys to generally be awesome and kick the ball around in a skilful fashion and so that’s what they did.

On the sidelines Nunny was keeping Barcelona at bay by telling them ‘your call is important to us’ and humming soothing ‘muzak’ down the phone line. While Uni emulated Brazil ’70 on the pitch Aladdin Vale did pretty much nothing of note other than accuse one of our reserve players of amateur proctology.

Bilal and Warmerdam used their height well, winning everything in the air and laughing at the muddy scene from high above, while the Adelaide Airport Authority diverted the flight paths of approaching jets.

The McLaren Vale #10, an angry-looking dwarf with an eye patch, a hook for a hand and at least one irregularly shaped testicle, spent the half just standing next to Bilal with a measuring tape and a protractor, working on angles and chuckling maliciously to himself.

Mikey was playing with flamboyance appropriate to his hairstyle and was generally having a jolly good time making his defenders look the fool. When Dooley put in a Rivelino-esque ball from the corner he leapt higher than everyone else (1.3m vertical leap, I checked) and pummelled it into the net for a deserved lead.

At half time we had a chat, mostly about the weather and also a bit about the football game. McLeering Vale were gambling on illegal cockfights, soliciting prostitutes and trying to scam old people out of their pensions. Number 10 was sitting down, sharpening his studs with a file.

The second half will go down as a dark stain in the annals of world football history. 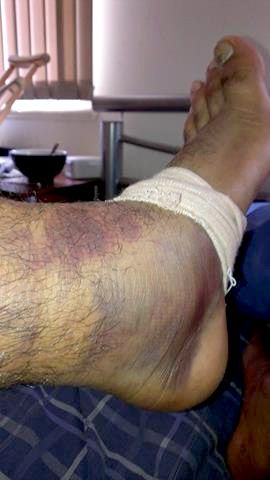 Bilal’s second half highlights consisted of the violet and crimson shades of his Merlot infused ankle.

Early on in the half, with Uni cruising at 1-0, Bilal won the ball in defence and held it, protecting it at his feet much as a male penguin protects the egg of his mate while she forages for food. The McLaren Vale #10, having been embarrassed by Bilal’s superiority in every aspect (at football, as a human being and as a penguin for that matter), spied his opportunity and leaped sideways at Bilal, channelling a lifetime of pent-up frustration into a two-footed lunge into Billy’s shin and ankle -snapping multiple bones and ligaments in one psychopathic act of violence. As our hero writhed in agony on the ground the offender got up, yelling that he won the ball and when the ref only reached for a yellow, McVillain knew he’d gotten away with a heinous crime.

As far as Uni are concerned the match ended there. McVoles got three goals and celebrated like scumbags.

(People’s Army of) Lu launched ground assaults to no avail. Mikey got a yellow for a 50m slide tackle through the mud and over the fence into the river.

Bilal sat under the marquee looking despondent and getting magic sprayed. Turns out magic spray doesn’t fix bone fractures, who knew? After the game he insisted on driving home and then went out to DJ that night on one leg, like a BOSS. Hospital and major reconstructive surgery? Pfft. Gotta drop some mad beats first. 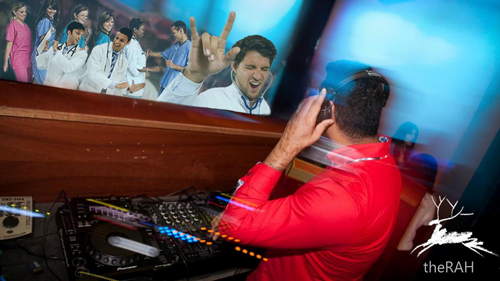 Bilal wasn’t going to miss out on his DJ gig Saturday night, so they let him do it live from the hospital bed