On Saturday afternoon another chapter was written in the titanic struggle between good and evil, light and darkness, that is Adelaide Uni v Old Ignatians SC Division 4. Their very name, an anagram of ‘Old Satanic Sign’, indicates the depth of the malevolent forces that the heroic boys in Grey were up against. With such a serious task ahead of them the Uni players warmed up by pinging balls at the cars parked next to the pitch, the house across the street and the roundabout on the corner.

The game was played on a pitch of miniscule dimensions but that in itself posed no real problems for the Greys, given that our own pitch is the size of a hobbit’s front lawn. 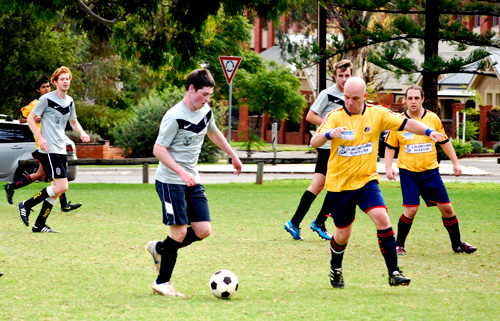 Anish was running amok on the left wing thanks to a series of beautiful through balls from Dave, but when he tried to challenge the goalkeeper after he had already picked up the ball, he was duly shown the cheese.

On the right wing Kyle was similarly linking with Jwood, both using their twinkling toes and Latin sense of rhythm to bamboozle defenders.

Down the other end of the pitch the referee gave a bizarre indirect free kick in the box when goalkeeping debutant and all-round swell guy Etshin collected the ball and had the audacity to bounce it on the ground before booting it back into play. Apparently illegal. Seems our players never got the memo from FIFA that the laws of the game had suddenly changed. Thankfully we defended like beasts and Dancing Ass-Toil couldn’t take advantage.

Half time was certainly not free from incident, but the less said about that the better, other than to highlight Etshin’s magnificent UN peacekeeping / Malaysian judo skills that ensured everyone could get on with enjoying a nice Saturday amateur sports match.

Having favoured aesthetic beauty over scoring goals during the first half, Greys set out after half time with the intention to actually win a game of football. There were fewer Sam’s this week, but the team sheet did also feature Seamus – basically a Gaelic Sam.

It wasn’t long before a breakthrough was made: after a scramble in the box and a neat pass from Seamus, Kyle pounded the ball home with no remorse. Uni 1, A Slanting Disco 0.

Dave had shifted from midfield into the centre forward position and it wasn’t long before he took advantage of his move up the pitch, pulling out a sweet 360 degree pirouette before slotting the ball into the goal, then celebrating with a 720 tailgrab rodeo flip. 2-0.

An enemy goal in reply kept them breathing down our necks in a creepy, dark-alley kind of way and the only way to respond was to score again. Dave Bagfullofgoals-ly duly took matters into his own hands and banished the forces of darkness with another glorious strike, smashed into the net like a scud missile to rocket to the top of the goal scoring table.

More substitutions were made. Tony and Gaelic Sam combined together in midfield like Rachmaninoff’s left and right hands (too highbrow? Pah, philistines) but another goal to Analog Tin Discs made things a bit tricky. 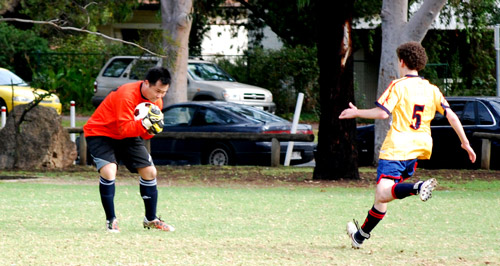 Etshin made some great saves despite having to deal with the repetitive sounds of Calvin Harris feat. Kelis in his head throughout the second half

The boys thankfully held it together during squirty-bum time with some heroic defending all over the pitch and when the ‘referee’ blew full-time an almighty cheer erupted from the sideline. Good had triumphed over evil and the Uni B’s guys could go home and watch Eurovision safe in the knowledge that they had made the world a better place. By the way: Montenegro, how good were they???