Wearing of Undergarments under Shorts (including Skins)

Wearing of Undergarments under Playing Shirts

Wearing of Tape or other material on Socks

A new rule has been introduced in 2013 relating to the wearing of tape or other material to hold up socks. If tape or similar material is applied externally to the socks, it must be the same colour as that part of the sock that it is applied.

Examples of what is acceptable and unacceptable have been outlined below for your information.

Please note that if a player is wearing any equipment that breaches the rulings as outlined above, the match official will direct the player to remove the equipment.

It is the responsibility of all clubs to ensure that all players that take to the field of play are informed of these rulings. To assist in this process, please circulate this memorandum to all players and also display it in changing rooms. 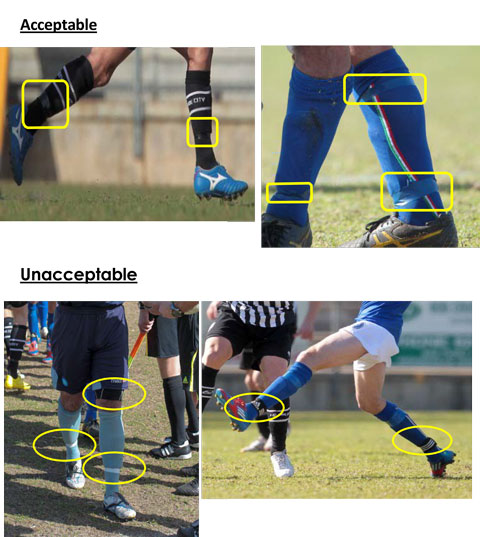 This article contains the exact information provided in the memo from FFSA dated: 27 March 2013, titled ‘Re: Wearing of Undergarments’.