Grads Red have retained the Bill Barbari Cup after a pulsating 4-4 draw with Uni Whites on Saturday.

The Reds triumphed ahead of the Whites on goal difference after both teams finished on five points.

The Blacks, fielding their division four team in lieu of their first team on the final match day, could have taken the cup honours with a big win, but were held to a 1-1 draw to a much improved Grads Blue.

The Cup was played over three Saturdays at The Parks Community Centre, Angle Vale. 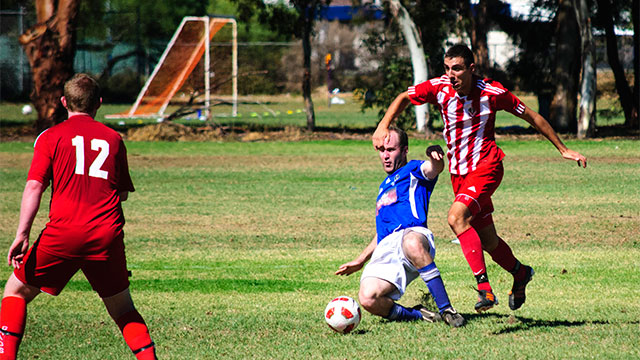 Overall CUP Winner by points (3 for a win, 1 for a draw, 0 for a loss)
Then by Goal difference (for v against)
All games 45 min halves and 10 min half time break, with up to 5 players allowed interchange, except A team games where it is 3 Substitutes only.
Referee payment split between teams of $70 ($35 each team)
Cost per team, per game, per pitch = $10 ($160 per full day covers costs of hire)