Home>AUSC White – The Year in Review

What a year. The coulda, the shoulda the woulda.

A new dictator stood in front of the latest crop of wannabes, has-beens and never-weres and declared the protocols of his own agenda. There would be no welcoming speech only a declaration of a no dick-head policy, any DH’s present should leave now. Bresolin had spoken, we had a new leader with a clear vision to make the Whites great again. 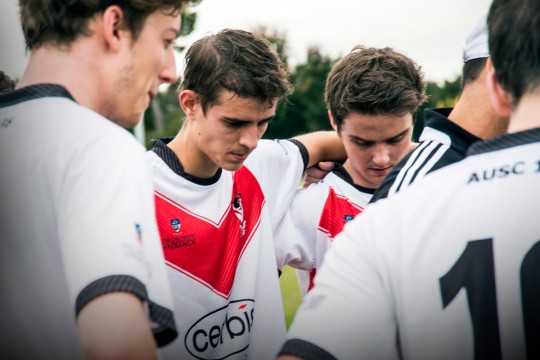 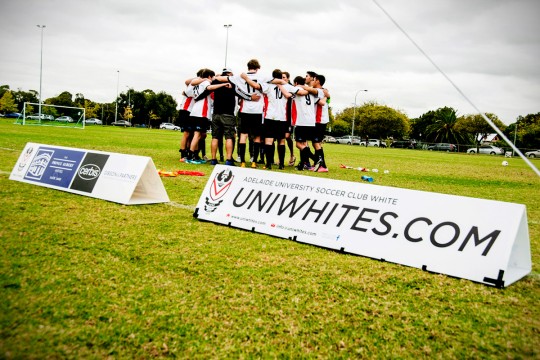 Pre-season began as every pre-season begins – full of hope and optimism. Wide eyed newbies mixed with the old guard, as the senior coaches peeled their eyes looking for the new Scott Penfold.

Unfortunately, all that turned up was a disenchanted Rostrevor old boy. Bres did recruit a hot new keeper however, so things weren’t all bad. But with Bres in charge of the firsts, club legend Crab in support and Alan steering the entire ship, we would be honing a well-disciplined team rather than relying on random French backpackers to save us.

In the lower ranks, newly appointed coaches Matt B and George had to pick 30 odd spots from five thousand hopefuls.

As the trial games began. the black book began to fill with names that would get the chop. Hearts were broken and tears were shed. Someone’s Mum even wrote a letter complaining about how her ever-loving son was treated. It’s a tough gig coaching the 3-4th div of collegiate football, but that’s why we get paid one free snag each on a Saturday. 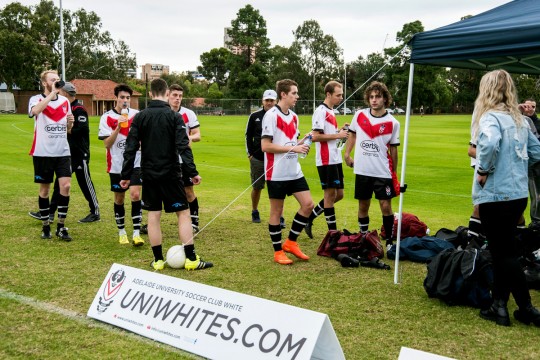 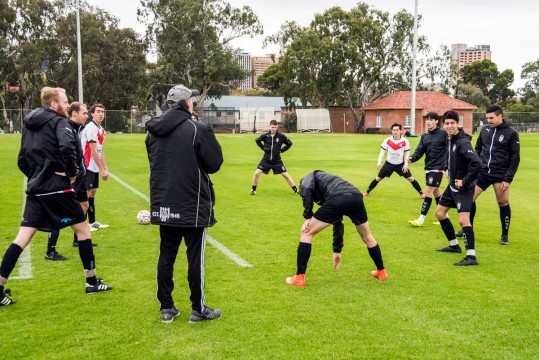 But our optimism would be short lived as we entered the league season versus Pembroke with the forces of darkness assembling against us.

‘He-who-shalt-not-be-named’ gave our newly formed D team a wallop, George’s C were thumped 6-0, B’s narrowly pipped at the post 3-2 and the A’s were outrageously robbed of victory by a shady linesman to take home a point, 4-4. On the upside, Alex was red carded, beginning his season by gifting us all some ‘lolz’. Going to the South Parklands and getting rogered might be fun for Kirsten Staff, but for the rest of us, it leaves a bitter after taste. But as Yazz wisely told us in song – the only way is up.

To cut to the chase, our A and B teams went on a streak of victories the like of which hasn’t been seen since Saf and Wez were ravers.

Seemingly unstoppable the A’s found their mojo and Bresolin was already polishing the league trophy muttering I TOLD YOU SO I TOLD YOU SO.

Former Rossie stooge Pedron, had quickly become a blanco-brother, and his dyno skill in the middle was allowed to blossom thanks to the robo-like running of Aidan Hall (RIP).

With super flash wingers Matty Chan and Dongas skinning all before them, the Italian lawnmower snarling at anyone who came near him, Bres-academy wunderkind Ed Mitch the rocksteady full-back, and unlikely rags-to-riches story ‘Ollinho’ Smith scoring some of the best goals seen since the days before Superman’s transfer to Sydney FC – we looked unbeatable.

Under the sage guidance of Crabsticks our ressies too were equally successful. Held together with a phalanx of mid-careerists at the peak of their powers, a striker who seemed to score at will and club manager Alan who seemed to be everywhere – feeding balls from the midfield while turning snags and selling beers to minors on the sideline. This was the best attack and defence in the league.

In goal, Dan Aiken – who, like the caretaker in The Shining – just seems to have always been there (speaking of Dan Aiken I’ve unearthed some footage of me from season 2010 calling for a short ball from him – view here).

There were some hiccups along the way – bogey team Immanuel causing mild mannered James to suggest to the referee that he might be a f**kwit; and the Sacred Heart 5-2 loss – …but this seemed to be the B’s season.

In the CUP rounds we pummeled ‘He-who-cannot-be-named’s’ D team 6-0. This was thanks in large to a Pirlo-like appearance by a humble veteran playmaker, who put on an inspired passing masterclass. This was followed by victory against old foes Windsor (after the B’s had tactically softened them up, letting them win the round prior).

An Indian summer meant the sun shone as we enjoyed a montage of snags, decent esky beers and glorious victory. It all felt a bit like the part in Goodfellas where he’s snorting mountains of coke, shagging his moll on the side and making loads of cash. Then something would go wrong and the bodies would start appearing… 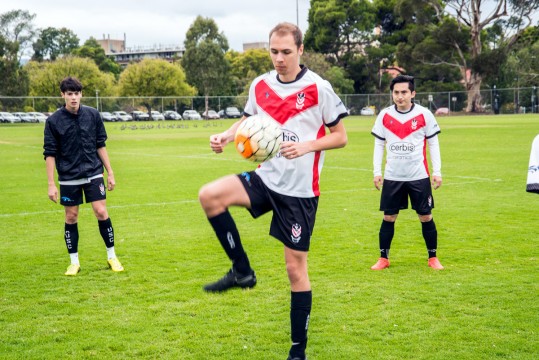 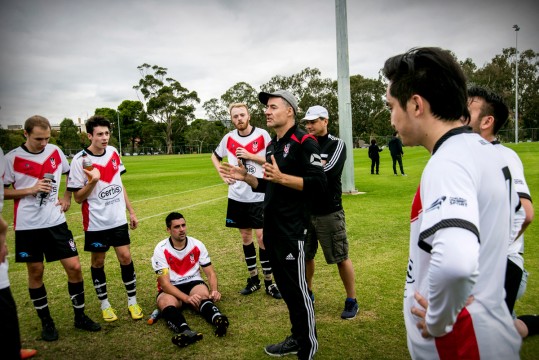 Meanwhile in the lower divisions

Meanwhile in the lower divs – things had not really got into second gear. On paper the C and D teams were strong. We had a contingent of exciting new players from Oman, remnants of the Bres academy, some geriatric survivors of the Robo-Cop years as well as a few new heads who had avoided the summer’s hack ‘n’ slash.

Standouts were brother Moatasem (centre back), Jules (prior to his bad Bali haircut) and keeper Martins.

The D team showed a lot of spirit – and as cheap as it sounds we deserved more than we got – with narrow losses, avoidable draws and a plague of injuries taking out vets Saf and big Rob.

We started the season with hopes of a League Cup upset and the glory of a Div 4 championship trophy, but will end it happy with a bottom-to-mid table finish, a sausage at the end of each game and having avoided a knee reconstruction.

Over cheap schnitzels and pints at the Prince Alfred, we told ourselves that the C and D teams were a two-year plan. There is enough talent in both teams to evolve us into a major force.

E is for Extras: a new force awakens

One of the highlights of the year was the ingenious idea to create an E team. Each week we destroyed the dreams of old and young, having to choose 16 names from around 30 players. Heartbreak, tears and whinging every Friday was my lot (and that was just from Wez).

Alan, our can-do snag wrangler made a decision, enacted it and made it so in one afternoon. The E team was born.

But who would manage this new entity? This was a carefully considered, highly tactical decision that might affect the club for years to come – given this I looked around the group after training and asked the closest person if they wanted the job. Ryan Harrowfield, desperate to get a game in any team and smelling the oily rag of power before him, said yes. He was anointed on the spot.

Thus a new chapter of Uni White history began. No longer would the bottom of the barrel go hungry on a Saturday arvo – Ryan would get a game by choosing himself as striker week in week out.

An ambitious ‘back three’ tactical formation from the player-manager Harrowfield led to two poor results (3-4 pembroke gold, 1-4 pembroke white) for our first games of the season but a switch to a back four bolstered the defence and enabled us to secure some spectacular results. 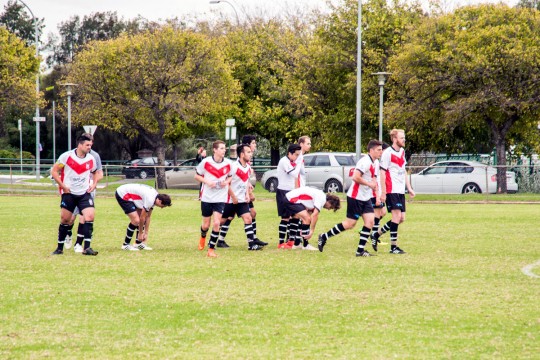 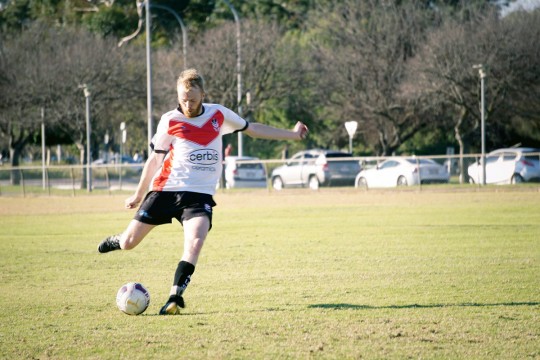 The incident at Rostrevor was the turning point of the season for the A team. Aidan Hall was the little girl with his finger in the dyke (no that’s not a internet video) – and upon pulling it out he unleashed a torrent of misery over this club.

Going into the ninth round undefeated, Bres’ perfectly balanced team was thrown out of whack, and the less said about this sad day the better. Needless to say it began a winter of discontent for our A team that it wouldn’t recover from. The Rostrevor match kick started an eight match losing streak, including being knocked out of the cup.

But what brilliance we showed, when it was good, it was some of the best we’ve ever seen in at the Stade Du Blanc.

All hope for silverware lay in the B team’s charge to the finish line – and they were in with a real sniff at the crotch of the League title. Could this be our year?

After giving Mercedes a right royal flogging, they knocked over Comets before destroying the Blues 17-0.

Special mention must go out to Lewis Whittenbury for taking home 3 points and Ellery for bringing shame to the ‘Glamour’ by taking 0.

The B’s had a severe case of Crabs – inspired by the old boy’s locker room banter and sage council, it came down to the wire with a win needed against Rostrevor, and Mercs to lose.

Alas fortune did not favour the brave (nor was it helped by Joe’s ‘clearance’) – and the bronze it was. But what a great season – one of the best on record statistically. As Crab said – the team did enough – just not enough in a freak year. Forza Bs!