Adelaide University Soccer Club stars Jenna McCormick was best on ground, Racheal Quigley scored a goal and Emily Condon made her W-League debut, as Adelaide United shocked Canberra with a 2-0 win on Sunday.

The Lady Reds are now one point outside of the top four after two wins in their last three starts against top three opponents.

Canberra United were perhaps still on their extended Christmas break as the Lady Reds were 2-nil up within 13 minutes. 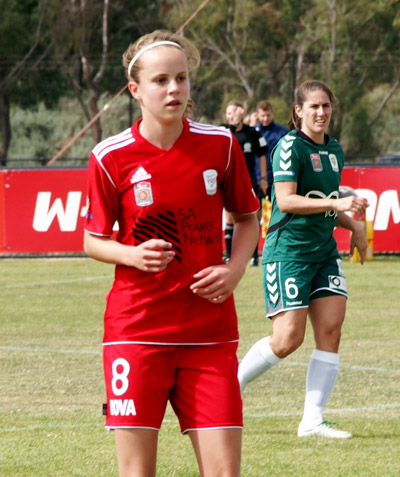 Lisa-Marie Woods netted the opening goal after 10 minutes, before Quigley scored from the penalty spot after Canberra goalkeeper Lydia Williams recklessly dived into a challenge inside the box.

Condon joined the match from the substitute’s bench at the hour mark, making her first appearance in the competition.

McCormick (main image) was rock solid all match in the centre of the defensive line and ensured Adelaide earned its first ever win against Canberra in five years of the Westfield W-League. She was acknowledged as ‘best on ground’ by ABC Grandstand radio.

AUSC Blacks vice-president Kevin Holohan said he was ecstatic with the input from the AUSC players.

“It was a great game, the best I’ve seen by Adelaide United and a fantastic contribution from Jenna, Rachael and Emily,” he said.

“We know these girls are exceptionally talented and it’s not very often we get to praise them all at the same time and in the same game.

“We’re extremely proud to have them part of the AUSC and hope their W-League success with the Lady Reds continues.”

Adelaide United is at Burton Park again on January 11 against the Western Sydney Wanderers.

Racheal Quigley scores from the penalty spot to put the Lady Reds up 2-0 after 13 minutes.