Overall,
it was a clinical performance from both the As and the Bs as they kicked off
their cup campaigns with 3-1 and 3-0 victories respectively. Despite nervous
moments, the Uni teams looked the better sides today for the majority of the
game. Uni reserves in particular should be credited for some great overlap play
down the wings and movement off the ball. Two goals for Olly and one for Mike
in the As were enough to see off San Marco, while Sean, Luke and Alex got their
names on the score sheet for the Bs. 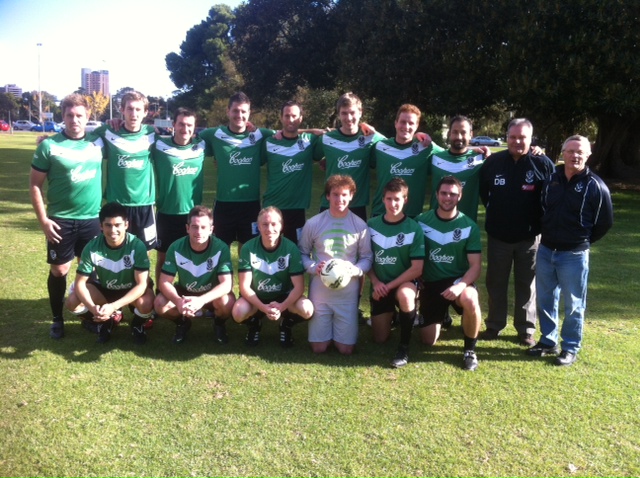 A cold day and a grey sky sit over the Uni grounds as the unhelpfully
named Blacks take to the field against San Marco in their green strip.
It’s cup round 1 today and given the pre-season cup run the Uni team mustered,
they will have high hopes for their chances today.

Once the game settles into a rhythm it’s the Blacks that are making the
early half-chances. Mike’s free kick is deflected off the wall early and Olly
is getting balls in from wide on the right, but nothing is seriously troubling
the SM goal mouth at this point. At the 10′ minute mark the SM captain
goes into the book for a challenge on Barry. Moments later, Marco break away
down the right but squander a decent chance by shooting over Andy’s upright.
Despite Marco not being on top with possession, they should be ahead 1-0 when a
bobbling, loose ball finds the SM striker close to goal, but the shot is again
wayward. The Uni team begin to settle down and dominate possession after nearly
going behind and goals begin to look imminent. The breakthrough comes as Robbie
finds Mike on the edge of the area, with plenty still to do, Mike’s first touch
puts him away from the SM centre half and makes space for a shot with his left.
It’s a great finish from Mike on his left foot, low and hard to the left of the
Marco keeper and that makes it 1-0 to Uni with 30′ minutes gone.
Crosses and balls into the box are frequent now from Uni but a second goal is
proving elusive.  Uni are at risk of
coasting into half-time here as they are being caught on the counter by the SM
players. Uni defence seems stretched at times and the pursuit of the second
goal proves their undoing when a ball to the back post finds an SM player in
space. The shot is saved by Andy but the ball spills straight into the path of
a Marco attacker who has no trouble hitting the ball home from close range. On
the stroke of half-time, SM equalise and it’s 1-1 as the referee calls a
halt to the first half action. Uni undoubtedly feel disheartened coming in on
level ground given the superiority in possession and chance creation but they’ll
need to step it up a gear to put the game to bed in the second half.

Uni are on the front foot
straight away with Hewey almost breaking clear but mistiming his run and
getting caught offside. Into only the second minute now and Mike finds Olly
with a run in behind the SM left back. Olly is in on goal and a deft first
touch at full stride allows him to cooly slot the ball past the SM keeper to
secure the lead for the Blacks once again. It’s just the start the Uni needed, 2-1
now but with plenty of time to run. It’s deja vu almost instantly after the
kick off with Olly again in space at the back post but this time the SM centre
back puts more pressure on Olly and as a result the shot goes wide. It’s a real
period of offensive assaults for the Blacks when Robbie makes a blitzkrieg-like
run, barging through the SM back four but the final effort is wide. At the 55′
minute mark Tim makes way for Terry with what appears to be a lingering
injury. Tim’s had a solid game at the back and Uni will hope the defensive
shake up doesn’t open doors for SM. After the interchange, Hewey has two good
chances in the space of a few minutes but can’t quite manage to give the Blacks
a 2 goal lead. The general trend of the game continues as Uni are getting the
better of the play but can’t rest easy with only the 1 goal separating the
teams. Fouls are raking up on both sides with a few mistimed tackles
threatening to disrupt the quality of the game. Terry looks fresh off the bench
but is struggling to get in behind his man down the left. A quiet 10 minutes
characterises the middle of the second half until SM are shown are second
yellow for obstructing a Uni free kick. The scuffle briefly heats up but it’s
quickly defused by the referee and fortunately action continues without more
disciplinary action. In the next significant attack, Olly manages to hit a ball
which finds Mike, he is in on goal but the Uni captain is unable to get the
ball out from under his feet to get a shot away. Hewey then has another chance
but his first touch takes him too wide and the attempted chip fails to trouble
the SM keeper. The Blacks seem certain to put a third past SM as Chris’ cut
back ball is met at the back post but the tap in skims just past the upright.
Uni are dominating as the game has only minutes left but it’s a tense
atmosphere with only the 1 goal buffer separating the teams. Credit should go
to Marco for surviving the myriad of chances the Blacks, or should I say
Greens, have created, particularly defending balls in the air. In the closing
minutes, space is opening up behind the SM defence as they push forward to
equalise. Moving into extra-time and Olly puts SM out of their misery with his
second and the Uni’s third. Olly received the ball at his feet in front of goal
and managed to play a crafty 1-2 with the SM keeper before knocking it into the
back of the net, to the collective relief of the Uni supporters. The game wraps
up shortly after and Uni go through to the next round.

Uni have done just enough
today and the 3-1 scoreline is a decent reflection of the action. The Blacks
weren’t moving the ball as quickly as they have at times through the season and
the finishing never hit the peaks that it has in recent weeks but the regular
creation of chances and defensively solid second half performance are cause for
optimism. It was a tight, cup-like performance from Uni and they have to be
happy with the end result.