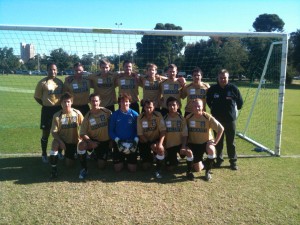 Following a comfortable 4-0 win at home against the Cougars, the Mens 1st team has secured the Div 2 Championship, with 2 games remaining. Congratulations to the team, and their coach Dave Baker, on securing both promotion to the Premier Division at the first time of asking, and the first silverware for the First team since the Div 1 Championship in 2000.

The trifecta is also still on, with the Reserves needing just a point from their last two games to secure their championship, and the C’s with a top of the table 6 pointer this weekend.

Update: The reserves have also confirmed their championship with a hard fought, come from behind 3-1 win over MA Hawks. Congratulations to Dave Bowman and his squad. Unfortunately the C’s drew 1-1 with Cove, and now require Cove to be upset this weekend to get any silverware.